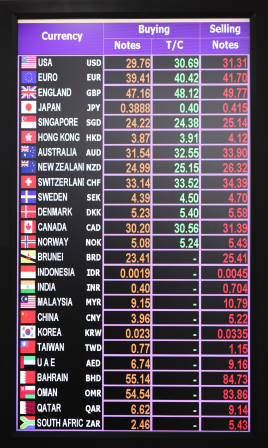 Exchange rates for the foreign currency markets are floating exchange rates. This means that the rates are not set by a government. Instead it is market forces alone which determine Forex rates of all the major currencies.

Compare that to the 100+ pip spreads typically offered by banks and money changers to retail customers! You can see why many of our students love trading currencies. Honestly just take a look at these typical bank rates:

So what determines these Forex rates?

Over the long-term it is economic factors that greatly affect the Forex rates. The government’s fiscal policy and monetary policy are two main economic factors. These include the central bank policy, interest rates, and the government’s budget. If the government’s budget has a surplus or deficit, it will also affect the exchange rate because a deficit causes a negative impact. Other factors include inflation levels and trends, the trade flow between countries, or the import and export trade balances. The overall state of the country’s economic growth matters too. This is because a strong economy means that the currency is worth more. A weak economy leads to a weaker currency.

Naturally, political conditions are another factor. Unstable governments and political trouble will devalue currency in that nation. Political factors are not just localised to each country. They can also include the general region or an entire group of countries.

Factors that are neither economic nor political include market rumours and market expectations. Negative events that are unexpected can have a significant and very fast impact on Forex rates. These events usually fall into two categories: natural disasters or terrorism. Either can be domestic or foreign. Both can rock the markets violently and rapidly.

How is currency trading for profit typically done? It is common to trade through either a broker or a market maker such as a bank or a foreign exchange trading firm. To trade in the currency market is simple. With a matrix on a computer screen showing the real-time Forex rates, a currency pair is selected, the mouse is clicked and a trade is made.

The major players in the Forex market are:

Forex trading is vastly different from trading in the stock market. But it is widely used to make a profit from. Brokers who offer Forex rates typically have lower commissions than stock market brokers do. This is another reason why many traders find currency trading a lot more attractive to get into.